The last two days I fished on Lake Champlain. The weather was amazing and it was great to be out there. I may have even gotten a tan! The bite was slower than it had been but I still did quite well. There were some quality pumpkinseed and plenty of hungry perch below me. I managed to ice two decent crappie and lost a real nice one due to equipment malfunctions!

Yesterday, I fished from 12 until 5. I was using the same set up presented in my 2-15 post. As a reminder, that was a chartreuse/orange tungsten jig tipped with a pink or red polli by Maki Plastic and a maggot. The fish were hitting it just as well as anything else that I could find so I went with it. I like tungsten because it sinks so quick… It gets me back in the action fast. The biggest issue I find with it is that it is hard to fish smoothly. The best way to counteract this is to use a spring bobber as it slows the jigging action enough to have it entice the fish. I ended up catching a bunch of pumpkinseed, a few bigger bluegill, and a loner 9″ crappie.

Today, I got on the ice shortly before 6am. The fishing was slow until it was light out but it was a nice calm morning with no wind. Once the fish started biting it was good for quite a while. Whenever it did slow, I would use my Aqua Vu camera to find a hole where there were fish and try to catch them. Mid day, we had holes spread out quite a ways. Whenever the fish would disappear it seemed like you would find more on the far end. I put on some miles today!

As for the big crappie that I lost today it was a disappointment! I was sight fishing in 9 feet of water. I checked my Vexilar and saw a fish coming in so I quickly looked back down into the hole. As soon as I found my jig, I watched it disappear so I started to raise my rod. I saw a flash from a fish mouth so I set the hook. I felt the weight of the fish and it rolled sideways so I had a clear view of the whole thing. It was the biggest crappie I’ve ever seen! As I raised it to about the 3 foot mark I felt the tension release and the fish swam away. Upon inspection of my jig I realized the hook had straightened out. I guess that’s what keeps me excited to get out every day!

Headed out tomorrow morning bright and early to the glory hole to see how things are going. Its been a while since I’ve been there. Not sure what the plan is for the afternoon but I’ll be on the water somewhere! 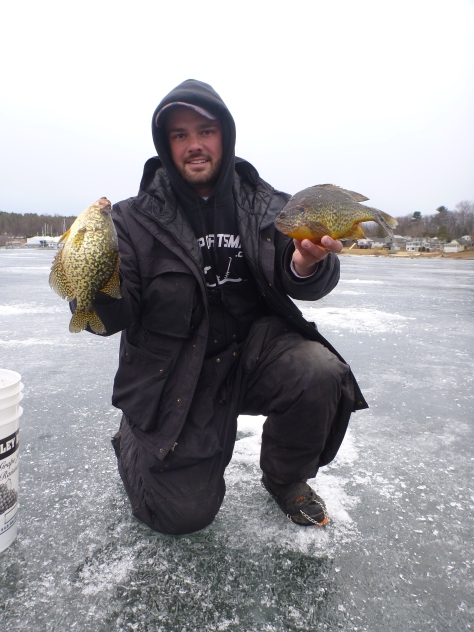