Hit the ice this morning bright and early looking to catch some crappies. We found them in decent numbers but they were all tiny. Managed maybe a dozen over 8″ out of the 51 that I iced. I kept just enough for a meal. There were lots of shiners and a few seeds mixed in today so it was frustrating. After 2.5 hours on the ice we called it quits and headed south.

The next stop planned for the day was suppose to be the last. It didn’t work out that way though… The fishing was slow. After punching a bunch of holes we quickly realized that the only fish in the weed bed were tiny bluegill and pickerel. We cut out several other spots around the lake and were at a loss for a good idea after coming up empty. Past years and summertime fishing have had completely different results on that lake! We decided to head even further south in search of some good bluegill.

I have been trying to avoid this inland pond because it has been real slow. When I got out on the water there were no fresh holes where we started so my hopes weren’t high. My buddy was punching holes while I followed with the Aqua Vu underwater camera. I was pleasantly surprised when I realized that every hole held fish! We quickly started fishing and had no problems staying on them for the remainder of the day. The best part of the afternoon was the crystal clear water. We were sight fishing in 7 feet of water. The depth we found fish at varied but it seems consistent to drop down around 4 feet before you would see one come in. They came as quick as we could pull them. Lots of the bluegill were in the 8-9″ range and a few larger. Every time I saw a bass come in I tried to take my jig out to keep from catching them. Unfortunately, I realized some of the “bass” were rockbass after catching one… One of the fish I really wanted to catch!

Tomorrow I will be going back to redeem myself for letting all those rockies get by! Stay tuned! 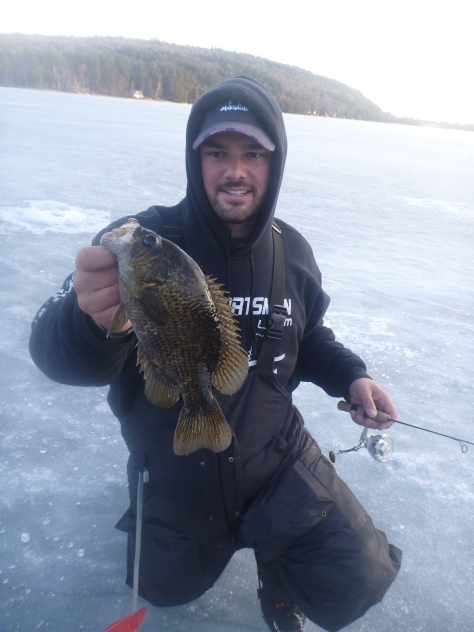