I slept in a bit this morning and left the house just after 7am. I had only planned on fishing for 3 or 4 hours  on an inland pond so I could have time to run errands and still be to work on time. By 8:30 I was dropping my first line. I was exploring a new spot I had never been to before and didn’t know what to expect. Since the spring flooding and Hurricane Irene, the quality and quantity of weeds have been has changed for the worst in many areas I fish. After looking around for 45 minutes and not finding any fish or weeds that were taller than a few inches, I called it quits. I headed to a different spot and started to catch some fish.

The second spot of the day had some decent bluegill and pumpkinseed but they were pretty spaced out. At best, I would pull two from a hole before having to move. Whenever I would mark a fish, they were at the bottom tucked into the weeds. If I saw a fish on the Vexilar I caught it the majority of the time. They were very aggressive for being in a daytime mode. After I had fished all the holes I punched, maybe 35 total, I fished back through the ones that were productive. I iced a few more fish before calling it quits there and headed on to fresh water.

On the way off the ice I got a call from a buddy who was nearby and wanted to fish. I only had two hours left so we punched holes and got at it. The fishing was slow but we both picked fish in many of the holes. We punched lots of holes throughout the weed bed and found no good concentrations of fish. I ended up fishing until 2pm so I stayed longer than I had planned but the weather made it worth it.

Being that the fish were finicky, we had to fine tune our techniques. We tried different sizes and colors of jigs and plastics as well as numbers of maggots. It seemed like most combinations worked but how you fished it made the biggest difference. When fishing plastics, the fish wanted it moving fast but maggots they wanted to slow to still. It was backwards compared to normal!

It was a great day to be on the ice! Now I only have to wait until Saturday to get back at it… 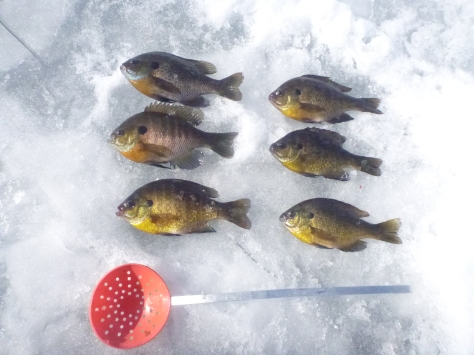