So as you have seen in earlier posts, I had a pretty decent day at the VT Sportsman last tourney held at Dillenbech Bay on Lake Champlain in Alburg,VT last Saturday.  There was certainly a lot of luck that lead to me to my final weight but some other things conveniently fell into place.

To begin, the weather was the worst I have ever fished in.  The temps weren’t bad but the wind was a steady 25mph at the get go and was gusting up to 55mph.  Like most of these tournaments, I was going to have to spend a lot of my time inside my Clam Shack.  I pre-fished the day before and found that the fish were not in the locations that they normally were in this bay.  They had been the week before but the recent snowfall cover on the ice had pushed them elsewhere.  It was up to Dylan and I to find that new location.  I had a feeling that the school had pushed out into deeper water.  We set out a little after six and walked right by the crowd which was right where we always fished and out to deeper water.

As soon as I picked my auger up out of my sled the wind literally tossed my shack up side down and dumped all of it’s contents, the wind was blowing!  That’s a 50lb shack empty.  We cut holes and fished.  The first hour was slow, I managed to catch a few bluegill to put in the bucket but no crappie.  I decided that I was going to work south towards a rather larger inside turn that I saw on my Navionics. I cut a line of holes and at the end I caught a 10″ crappie.  I punched more holes and brought Dylan and our buddy Mark over.  At this point I was fishing out in the wind.

In order to detect bites better I had switched jigs and tied on a HT Tungsten glow and chartreuse tipped with maggots.  This added weight helped to keep my line tight in the hole and allowed me to feel the bites even with the wind gusting up to 55pmh.  This was the first move that the weather caused me to make that would prove successful.

Enough was enough, a fellow fishermen said he had been getting fish sight fishing, dead sticking minnows. So into my shack I went to see what was going on.  Truth be told, the Crappie were coming in right under the ice, anywhere between 6″-2.5 feet down.  The minnows however seemed to scare them.  I cut more holes and sight fished but had no hook ups. Finally, at about 10am the wind died and it started raining, more reason to stay in your shack right? Nope, not me, I got out of my shack with a feeling that this pressure change was going to turn the fish on.  I grabbed my rod with my Tungsten jig and thought about plastics. Maki Plastics makes great baits.  I’ve used a lot of his smaller profile baits this year but never really tried any of his bigger stuff.  I open my bag and dug through what I had.  I heard a voice in my head, the Voice of Jamie Vladyka, ” white is the Champlain color man”.   I pulled out a white bait that was probably 2-3″ long, looked like a worm with a devil tail, the Spiiki.

This bait was poison to the crappies for the rest of the day.  By now the cat was out of the bag and fellow fishermen were quickly moving in to our location.  It was hard to hide scooping a 12″ crappie that was too big to lift out of the hole, oh well that’s tournament fishing for ya.

The weather caused me to do two things that proved to be key today, one tie on a heavy jig, and two, rain and pressure change forced me OUT of my shack and the fished turned on.  I ended the day with a 4.73 bag of 6 fish and the big fish of the day weighing in at 1.58lbs.  A good day for sure! 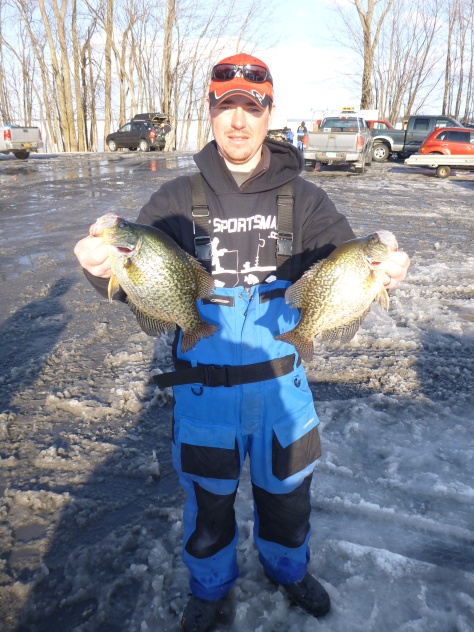