After we found the crappie last night we were motivated to get an early start. We hit the road at 4am with a chill in the air headed for the Connecticut River. The air temperature at the boat launch was 31 degrees and the water temp at the first fishing spot was 52 degrees. Another curve ball for us to figure out to understand the days strategy!

We fished the honey tree from the night before with no bites so we headed to the next two spots with the same results minus one smaller fish. Every spot that had produced the few days prior were fishless. We decided to fish a small flat that we had found a few fish on a trip earlier in the week. Right off Bobby caught a crappie so we got excited. Over the next 45 minutes we caught quite a few more bluegill including one 10.5″ with a big bull head and a solid pound of muscle.

The fishing slowed again and we trolled around searching out fish. Because the only productive aspect of the day at this point was the ice building in our guides, we decided to head and get in the sun regardless of how the fishing would be. We had caught a few bluegill earlier in the week in this location so what the heck we gave it a shot. Worst case scenario, we would warm up!

We fished for about a minute before I caught a fish. It was a gill. We had a slow drift going on in water that was slowly warming. We hit 54.6 degrees in shallower water maxing out at about 5 feet. As we crept along, I pulled the second crappie of the day. A solid 12″ male in no mans land. There was no structure and limited weeds nearby but we anchored anyway. We ended up catching quite a few gills there so we utilized the same strategy for the rest of the sunny shore line. Drift till we locate fish by casting parallel with each other towards shore, then anchor up, and fish till they stop biting. The shore produced quite a few big bluegill and the only pumpkinseed of the day.

We could see the sun rays hitting the spots we normally fish so we motored down thinking the fish may be biting. We found the same results as earlier. Nothing. We went back and forth for a while searching out active fish in hopes that the warm sun would turn them on. It took a while but we got into them in one of our spots but they were loyal to the shade. Rather that being in the sun like we expected trying to warm up, we caught the majority of the fish as we worked our cast out of the sun and into the shade. Exact opposite of the other side! With the water temperature now at 56.2 degrees, we were surprised but went with it. We fished the same spot a few more times and it was the only spot that produced a good concentration of fish all day.

It was funny to us that the fish were doing such opposite things in the same small section of river. With the water being fairly cold we expected the fish to, 1) be relating heavily to structure as it warms up faster and 2) be positioned in the sun as the shaded water was colder all day. Either way, we adjusted our fishing techniques according to the fish patterns.

At the end of the day, we snapped some pictures and returned the majority of the fish. I kept a few for a meal that night and was surprised to find that they were all spawned out. Both the males and females that I kept were void of eggs and milt!

The main bait used again today was the “Live” Baby Shad by Lake Fork Trophy Lures. We fished all colors today because the bite was slow and we were trying to figure them out. The best color today was anything that had chartreuse in it. The bite today was best when the bait was fished fast but a bit slower than the previous days. The harder the bait bounced, the better the fish would bite! 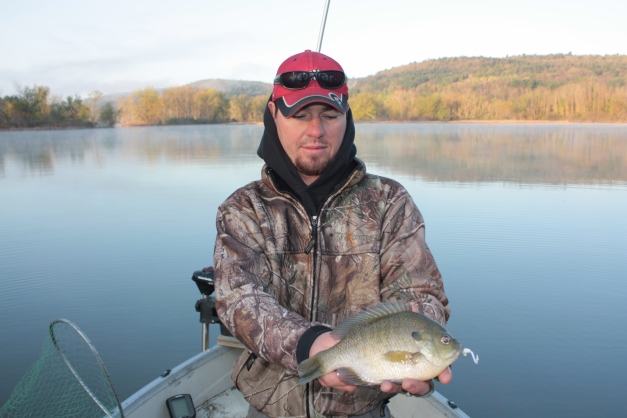