I fished Friday for smallmouth again. The day started decent but not what I had expected. I check the weather the night before and they were calling for sun and only a little wind. I found nothing but clouds and 10 mph winds all day! It made for tough sight fishing but after fishing for a while, we were able to find a few pockets of calmer water that held some decent fish.

The setup was the same as my previous trip. I fished a 4″ Gary Yamamoto rigged weedless on a Gamakatsu EWG Worm Hook. I once again chose darker colors (mostly watermelon because that is what I had) on a red hook. I have hook sizes 1/0 to 3/0 and I mostly use the 3/0 because I like the way it matches up with the worm the best. Especially with a 4″ worm.

We fished for about 5 hours and caught 45 bass. The average size was probably only around 14″ but we caught a three over 19″ and 3 pounds. You can see a video of some of the better fish on our YouTube Page. The fishing was fast when it happened but we had a few long stretches where we couldn’t hook a fish even if we wanted to. The wind was moving us along far to fast when we did get bites it was already too late and the fish was gone.

I even hooked into a pickerel… Big head but no body. 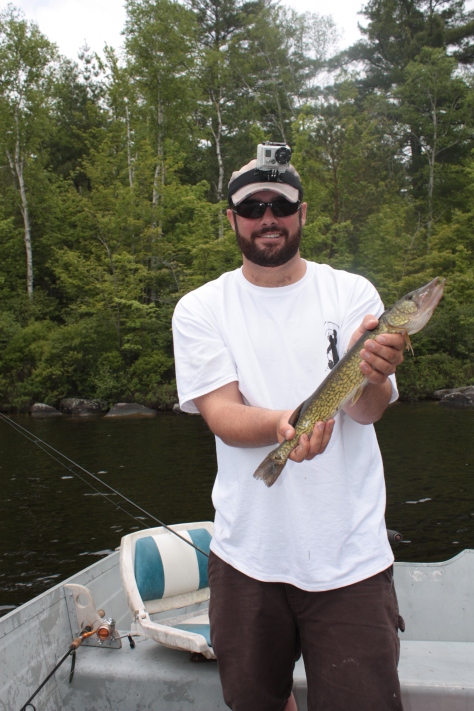 We found a good pocket in a shallow bay that was holding some big largemouth for this body of water. We were drifting over a rock bed and found a smallie bed that was holding two fish. We began casting to it without them even budging at the bait. That’s when we noticed a largemouth that dwarfed them by almost two-fold. It was easily a 20″+ fish. Without hesitation we started tossing senko’s, crankbaits, and every other lure in the box without as much as a glance from the bass. The second time through trying to entice this fish we found that there were four others with it; each being progressively larger. The bass were easily all over 4 pounds and I would venture a guess of up to 6…

I’ve had this same scenario play out once before and the ticket was a fly. Unfortunately, I didn’t have my fly rod that day and I haven’t had the chance to get back out there. From what I saw on that day and what I am hearing and seeing at work, the spawn is already on its way out and I would guess those fish have moved out from shore. Hopefully I can find one or two of them this summer as there aren’t many largemouth on this lake but they are usually big if you can find them.

Here is a nice one from last fall: