My girlfriend and I spent the day on the water trying to get her to boat her first walleye. Even though it isn’t a tough technique, vertical jigging in timber can be overwhelming with the numbers of times you have to retie. Although she isn’t new to fishing, I don’t want frustrate her to a point where she won’t enjoy going with me. For that reason, she is allowed to nap in the boat! I figure more fish for me!

We were on the water for sunrise and catching fish wasn’t a problem. The rockbass, perch, and smallmouth bass were aggressive. Walleye on the other hand were very elusive. After working with her on techniques to detect bites vs snags and ways to potentially free the jig without snapping off, we were on steady fish.

We fished hard until 3:30 and only one walleye was brought in the boat. I wish I could report that it was her who caught it but it wasn’t. Probably the highlight of the day was one rockbass bite we were on in 30+ feet of water. The fish were on before we could reel up slack after closing the bail and they were slabs! Most of them were 11-11.5″!

Check out Quick Bite on our YouTube page for more action! 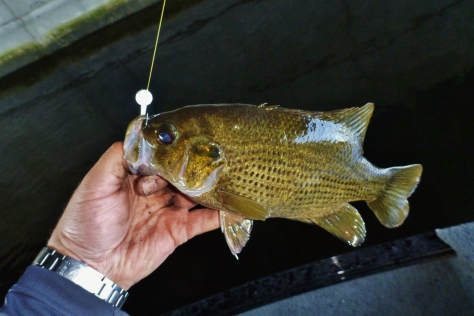