Trout can put up a good fight on any day but add a little fast moving water and you have a recipe for quite a battle!

Today was a quick trip as there was a sever rain storm coming in later in that day that would raise the already high water. I was on the water for a few hours in a spot that has been good to me in the past. There is quite a variety of habitat in the vicinity and I chose to fish an eddy. Because of the high water, I was standing on the edge of a field!

I was tossing a “Live” Baby Shad from Lake Fork Trophy Lures on a 1/8 ounce jig head. After giving the jig a few seconds to sink, I would start working it back through the slack water with quick and erratic popping action. The bites were relatively light but firm enough for a good hook. I landed 6 fish total and lost two others that got out into the main flow.

Although not measured, big fish was a rainbow around 20 inches followed by a 16″ brown that was super slender. I see a good summer ahead on this river! 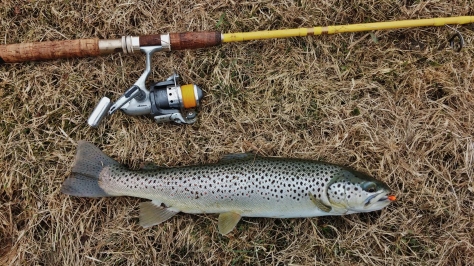