Dylan had to work until 4 but we were on our way to the lake within minutes of punching out. Hoping that the crappie would be in some of their spawning locations, rods were rigged and ready to go with brightly colored “Live” Baby Shad from Lake Fork Trophy Lures.

The bite was on as soon as we started fishing in depths ranging from 4-6 feet of water. While the crappie were being pretty loyal to a few small areas, the bluegill and pumpkinseed were just about everywhere surrounding. Judging by their aggressive bite, their spawn was on as well.

The bite was good for all target species during the day but as the sun started to set the bluegill and pumpkinseed mostly shut off. With the hydro glow lighting up the water surrounding the boat, we picked at the crappie until be packed in for the night. 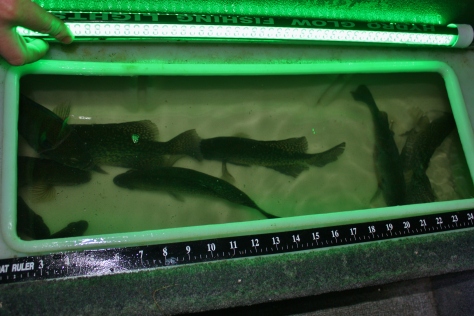