After a successful jigging new waters, we decided to test out the night time crappie bite. As many of your probably already know crappie can often be great night time feeders. Most fishermen choose to fish at night using some sort of illumination, anything from a lantern to a car headlight. For a few years now we have been fishing for crappie and trout at night use the Hydroglow Fishing Light. The Hydro Glow illuminates by using Green LED’s which are less abrasive to the fish and their feeding attitude.

We cut three holes, put the light in the middle hole and shacked up. As you can see in the pictures below the light really illuminates the ice and the water underneath it. It didn’t take long for the light to begin attracting bait-fish and crappie. Dylan hooked into a crappie within the first 10 minutes of the light being deployed. Night fishing requires a lot of patience. The fish typically are cruising at night searching out an easy meal. The longer you can stay in a hole with fish nearby the better chance you will have of putting a few topside. We fished them the same as we would during the day. Small jigs tipped with Maki Plastics and spikes.

The area we were fishing didn’t have much for weeds or any other kind of structure. When you would mark a fish on the bottom they were usually pretty easy to entice them into biting. We were able to ice a decent number of crappie with a few bluegill and perch mixed in a matter of a few hours. Not a bad first trip for a new spot. 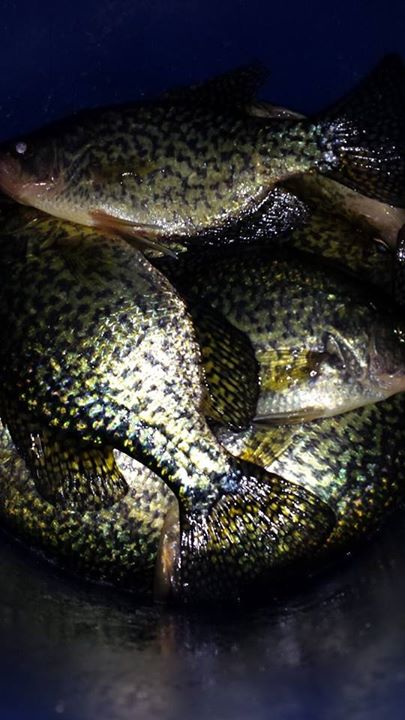