We got the go ahead from the women to hit the ice on Valentine’s day. After sleeping in just a bit, we were headed out on the ice just after 8 to find some panfish. The bite has been decent but the fish quality varies constantly with a lot of small fish in the mix. Only a few people were out most likely do to the cold temps, wind, and snow. After cutting our way out, the fish seemed to be located over one specific weedbed. To combat the cold, we shacked up and got the heaters cranking.

The fish bit. There was nothing you could do wrong as long as the kept the jig moving. We sat 15 feet apart all day once we found a decent pod of fish. The action was constant for gills and the crappie came through in the mix. We were set up paralleling a nice weed edge that the fish were using.

Although the bite was steady throughout the day, the best bites were when the snow came down hard and when the sun was shining. The extremes seemed to bring on the bigger fish. While these were the times to capitalize on, fishing high in the water column also seemed to weed out quite a few of the smaller gills.

We made it home safely after some slippery roads most of the way home! 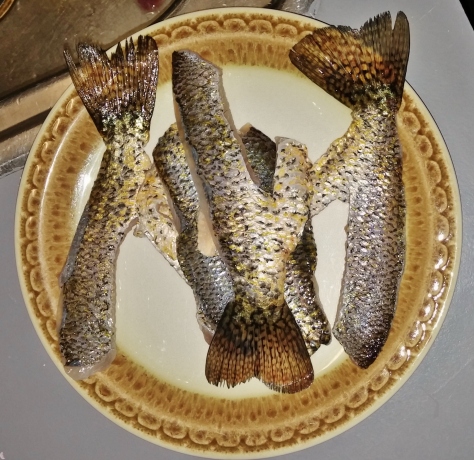