Our long and drawn out early ice this season has put a damper on our night trips but we finally made it out for a few hours last week.  Ice conditions were good with almost a foot of ice as we scouted an area to set up for the evening.  It’s usually in your best interest to doing a little bit of scouting before you land on a spot for the night, especially if your fishing a new body of water or if the fish your after are difficult to pattern.

We cut a string of holes an hour or so before dark.  We focused our attention a few different points of natural structure.  This particular basin lake had a few small weed covered humps protruding out of relatively deep water. We started our line of holes on and around the hump in an attempt to locate fish.  After fishing through the holes, we decided to cut along the weed edge on the first major contour break.  It didn’t take long for us to hit a hole with with active crappie in it.  After we iced our first fish, we decided that was enough for us to set up the Clam hub and our Hydro Glow fishing light for the night.

There were some active fish in the area as we were able to hook into them right off the bat.  The fish were coming through in waves, maybe five to six at a time right near the bottom. Most times we find them suspending just above the weeds but that’s the beauty of having a fish finder. Adjusting to the bite is much less troublesome when you can see where the fish are rather than guessing.

The fish bit pretty consistently until 7:15 but we stuck it out until 8:15 in case things changed. They didn’t so we headed home and packed up for the next morning! 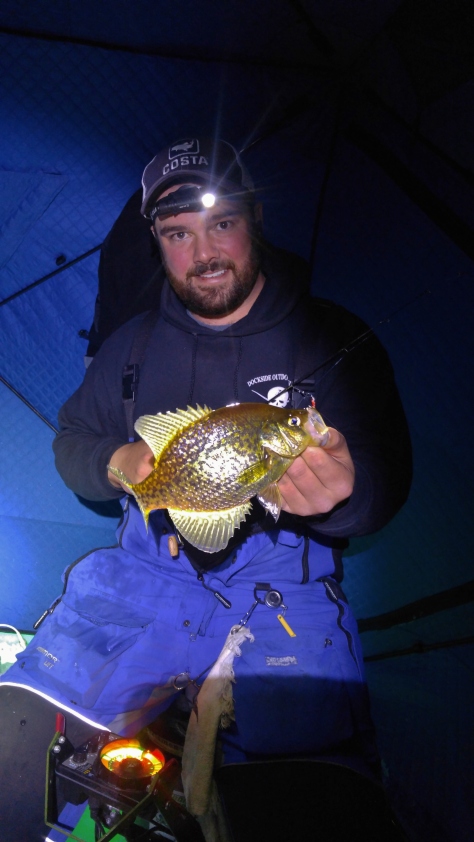